TECNO L8 was launched in April 2016 and it appeared to me that this battery monster device is officially the first ever TECNO that will house a battery with a very large capacity. Anyway, i was able to lay my hands on this device, there was definitely a visual and emotional connection with the TECNO L8 Android device. I took some time to review, test and verified certain specification/features to ensure they correlate with what we previously published here.

The TECNO L8 carries a 5050mAh non-removable battery that ensures you stay connected with your families and friends either online or offline, you should also experience extended gaming time if you’re the type that enjoys playing super HD games. You don’t have to worry about power if you get this phone. 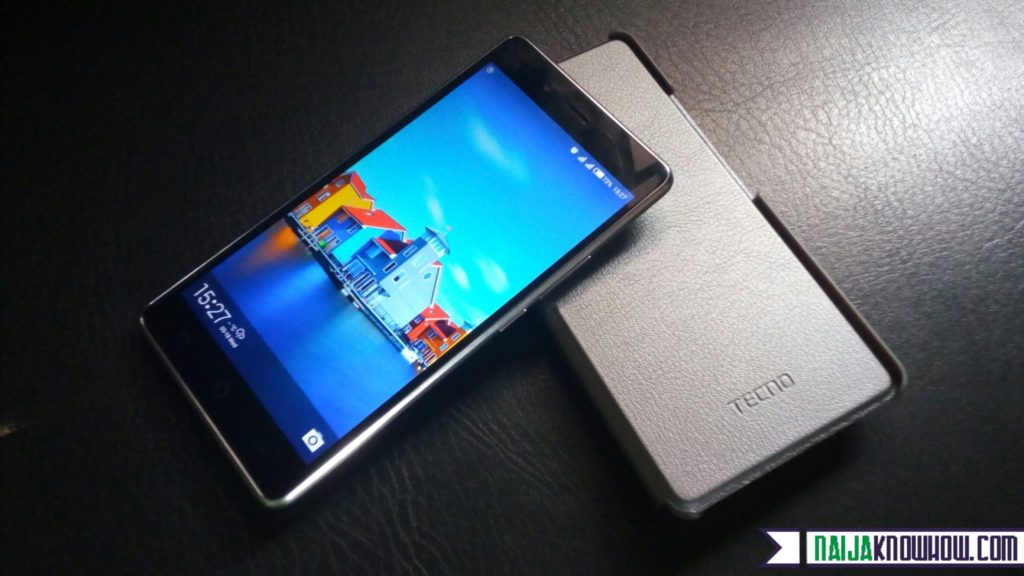 Like i said, in this content, you will certainly be sure whether to buy or not buy this device. Below are TECNO L8 full reviews and features..

I must first commend TECNO for their really wonderful way of packaging products, they are indeed KING at doing so. TECNO truly knows how to impress customers with their product packaging, this is an area Infinix and few other phone manufacturers have to improve on. TECNO gives you phone accessories such as free porch, Earphone and more unlike others, you’d buy them differently.

This product was packaged with a 1m long USB cable, Earphone, OTG cable, a mobile “Charger Head” like well all call it and a Free Porch.

TECNO L8 (THE OUTSIDE)

TECNO L8 is a 5.5 inches phone, [720 x 1280 pixels, 267 pixels per inch (PPI), IPS capacitive touchscreen with 16,000,000 colors]. Ignore all those technical terms. This Android device’s screen display is perfect, colours are well differentiated, not over saturated. Display is quite large, if you have a ruler there… you can as well point out 14cm, that’s the height of its display screen.

Phone full length and width is 154 x 77.5, a thickness of 8.85 mm (too bulky) and weighs 135 grams, However, comparing its weight with the Infinix Note 2, i will say, it’s a bit heavy for a 5.5 inches smartphone. Although, i wasn’t expecting less. What do you expect to get from a device with 5050mAh non-removable battery.

This phone is even more sleek in the outside, may be it’s the choice of colour? But, i don’t think colours have a role to play in this. It’s back battery covering was well finished, a silver metallic battery cover makes it shinier.

Has a dual SIM compatibility (Normal & Micro SIM) and also the Memory card slot is located right above the battery in between both SIM slots (see image above).

A 3.5mm Audio jack is located on topside of the phone, the right hand side has the power and volume button, you will find the Ultra Power Button by the left and downside contains the usual MIC and v2.0 MicroUSB port.

A 2MP Selfie Camera, Call speaker and a sensor is located on the upper front face of the phone, at the back, contains an 8MP Camera with Flash while the LoudSpeaker will be seen below. 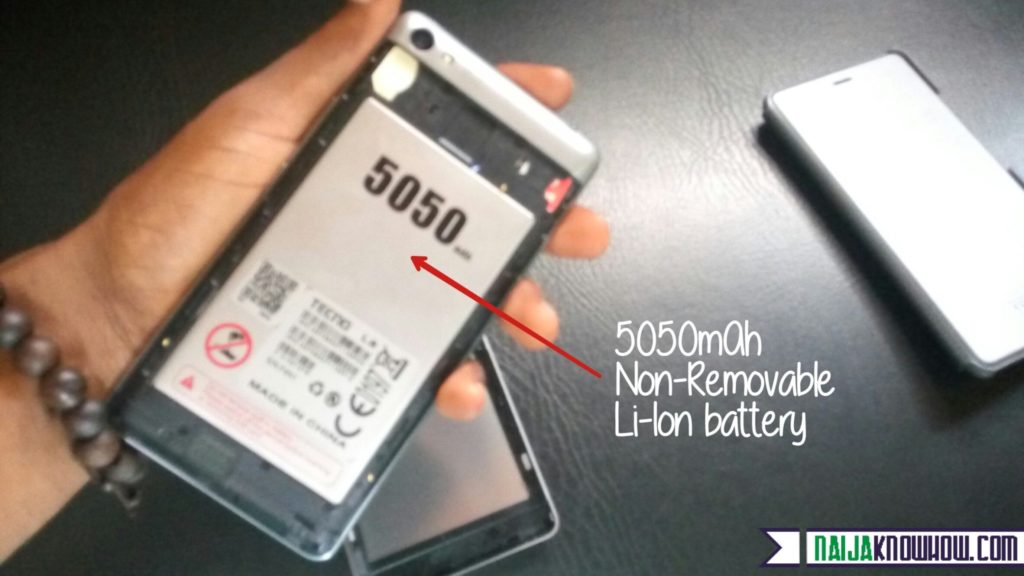 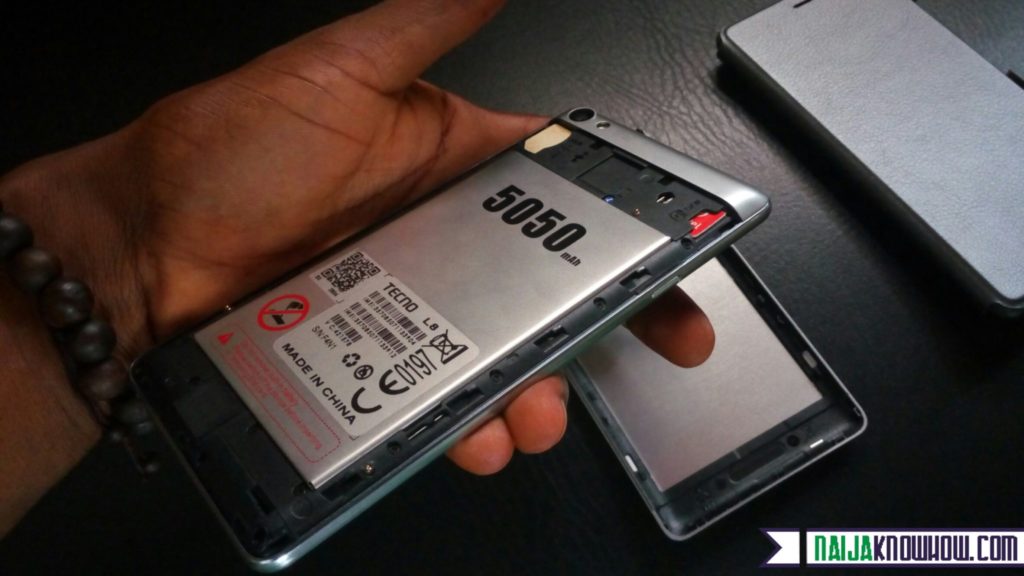 Like we all know, the selling point of this phone is its ability to last long, it has a non removal battery capacity of 5050mAh, this can last for more than two days depending on operations performed on it.

TECNO L8 (THE INSIDE)

Now going inside, the first impression was the HiOS user interface, i hope you know what it means? The TECNO HiOS which was launched two months ago had to be featured in this phone. Though, it has the regular Android Lollipop 5.1 OS but built in accordance with TECNO’s HiOS interface. 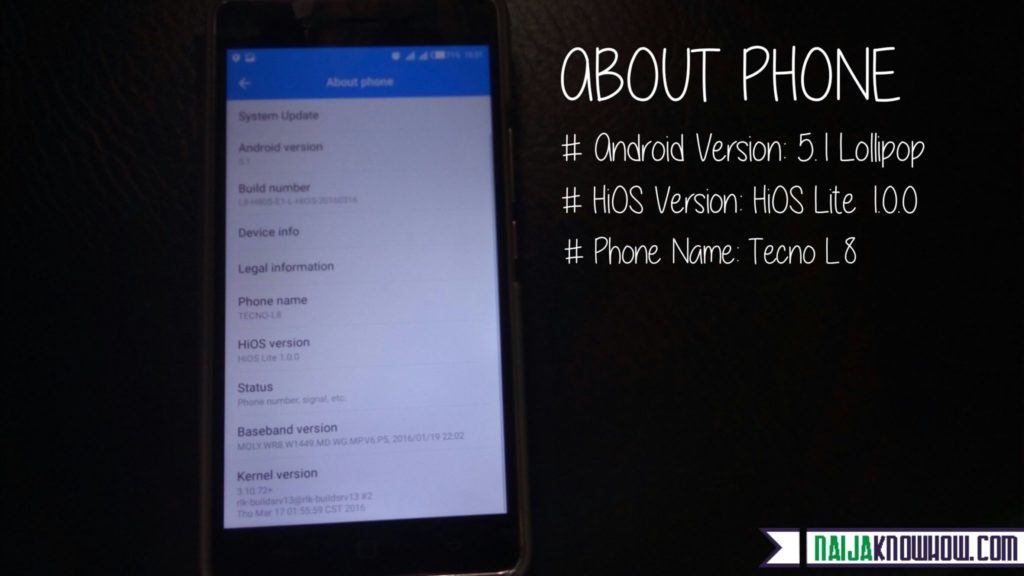 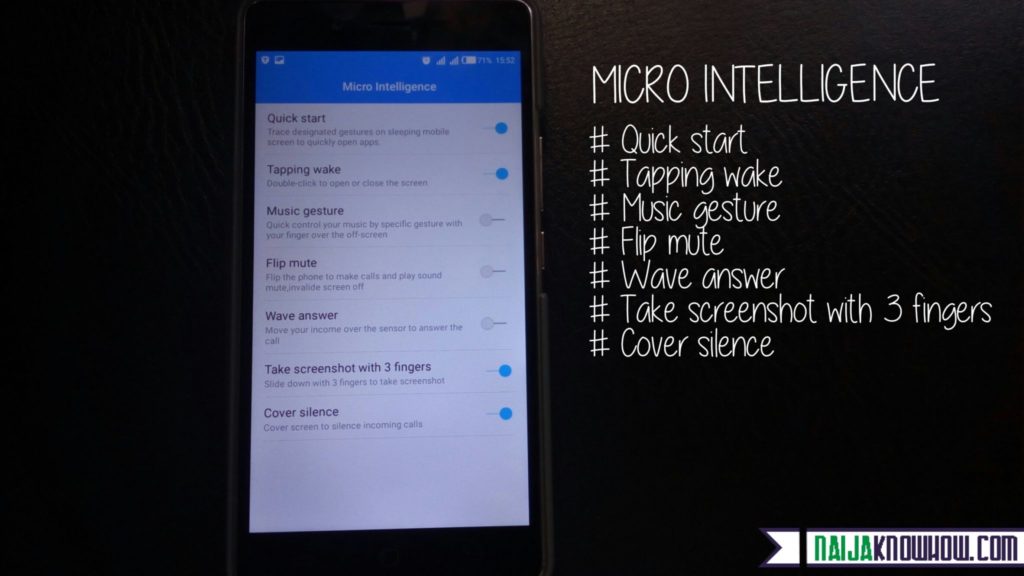 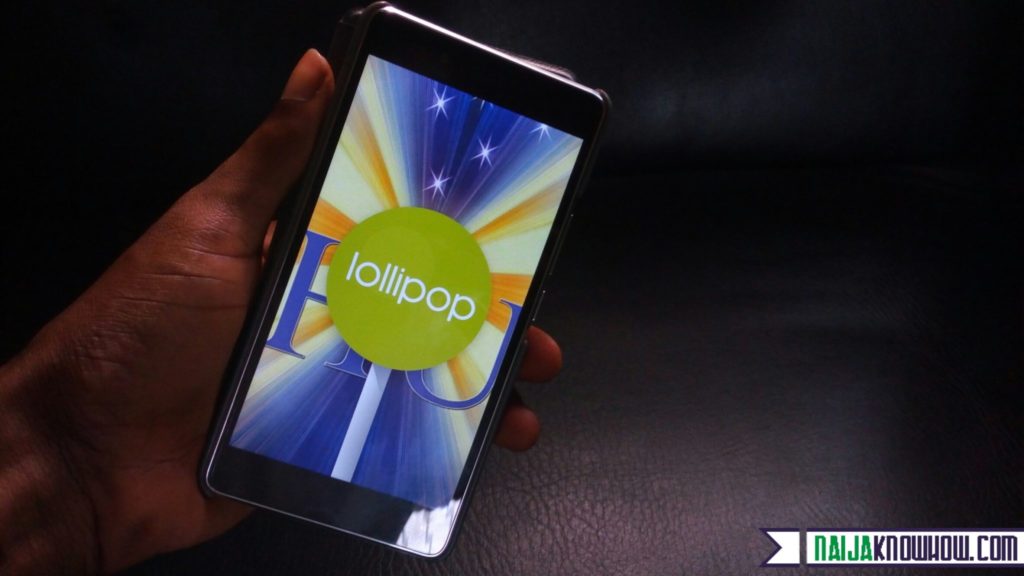 TECNO L8 Android phone has a 1GB RAM and an Internal storage of 16GB which can be expanded via MicroSD card, up to 128GB. Played the pre-installed Asphalt only to find out that 1.3GHz dual-core Cortex-A7 CPU (MediaTek MT6572 Chipset, Mali-400 GPU) is very fast, the game was very smooth with hanging.

It has every features needed under this category except a 4G network and NFC (Near Field Communication). In fact, no TECNO device has the NFC feature yet.

The primary rear camera is 8MP, up to 3264 x 2448-pixel pictures, HDR, autofocus, Geo-tagging, panorama camera with LED flash. TECNO L8 camera quality did impress me, i was amazed by the sharp video and image quality. I took a couple of video and image sampling on this device and the outcome was indeed impressive.

Secondary 2MP selfie camera did quite good, not bad but considering the value and the outcome. I will give it a 7/10. See camera Sample videos and Images here.

Power Off & Power On 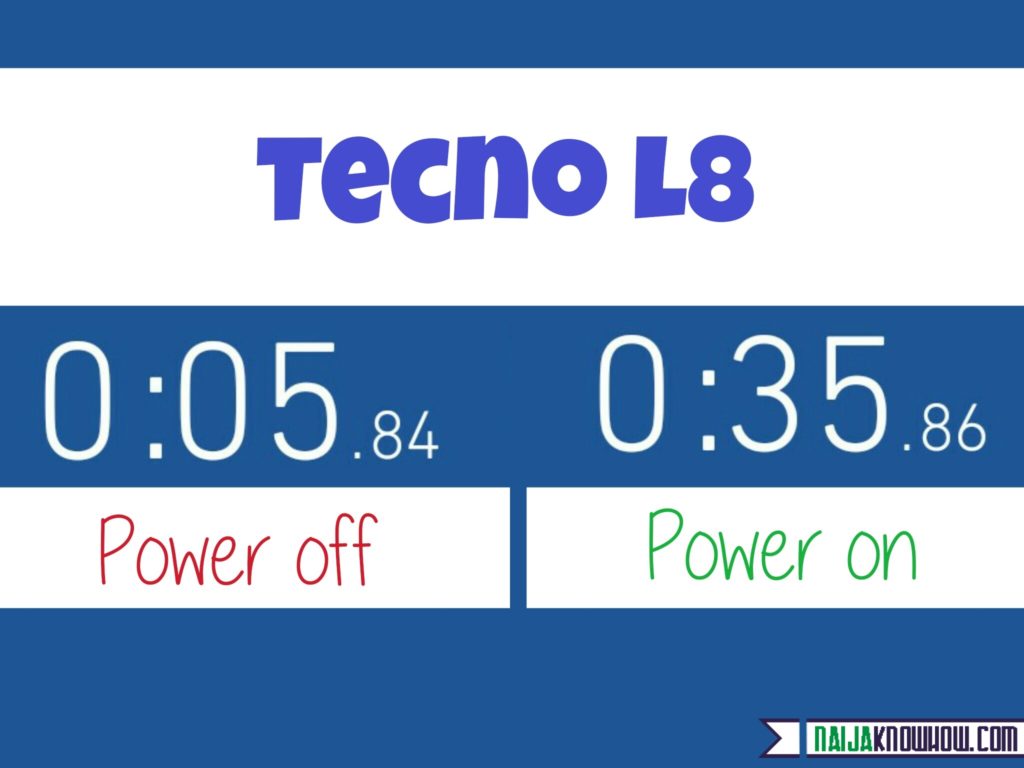 This is about what i can put up regarding this device for now, if you have anything you think i missed out and want to ask, kindly use the comment box. As you can see, 5050mAh battery in Nigeria is perfect, a battery capacity enough to hold intensive usage for more than 24hrs, this phone is all about the battery, nothing more. TECNO L8 price in Nigeria ranges between N33,000 – N37,000, the price seems too high if i consider its specs. If you’re looking for a more cheap phone, i think you should consider looking at TECNO W4.

Shop On KongaClick here to buy TECNO L8 from Konga

Shop On JumiaClick here to buy TECNO L8 from Jumia