A special sidewalk located along Yanta Road in Xi'an City is painted red, green and blue, 80 centimetres wide and 100 meters long. Along those lines, there are pictures of the phone to distinguish it from the usual pedestrian path. Learn more! 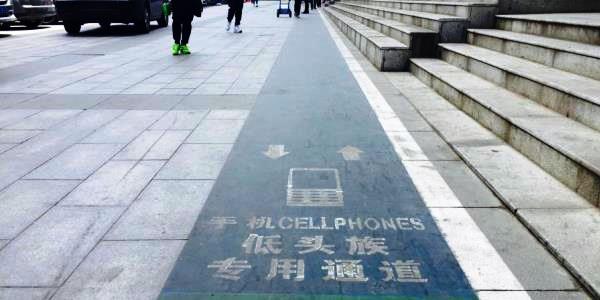 Mobile users often feel compelled to view messages or take calls while on foot, thus endangering the security of many parties. A city in northern China is reportedly providing a special lane on one of the main streets for the ‘mobile zombies‘.

The special line is for the phubber, a slow-walker who has to look at the phone, regardless of what’s happening in its surroundings.

According to Shaanxi Online News, a special sidewalk located along Yanta Road in Xi’an City is painted red, green and blue, 80 centimetres wide and 100 meters long. Along those lines, there are pictures of the phone to distinguish it from the usual pedestrian path.

Shaanxi Online mentioned that a large shopping centre in front of the road, since a month earlier urged the making of the track.

It is said that many vehicles that often sideways pavement which is crowded with pedestrians might put people lives at risk of accidents, especially those who may not pay attention to the surrounding environment.

News site The Paper interviewed local residents who welcomed the introduction of the pathway.

- Advertisement -
Also Read:  Android 12 allows you to share WiFi without saying a password or using a QR code!

A resident named Wei Xiaowei said it was the first time he had seen such a thing and he thought it was ‘pretty good’.

“Everyone who walks here thinks this path is very safe: on the other side of the road there are cars and other vehicles,” he said.

Hu Shuya, another resident, said: “Young people’s life is moving fast, and they always look at their phones, this path makes us calm – those who look at their cell phones often see this path as a form of protection.”

However, there is also a confusion to this path, someone says that mobile users are like ‘blind people’, and other users see that phubber who use this path may still risk colliding with each other.

I once posted a list of things that you should avoid doing while using your smartphone and this is definitely one of my most important points. The dangers of using the phone while trekking is glaring but do you think this is a solution to the growing use of mobile phones on the road?

So over to you, what do you think about this for Nigerians, do you think it’s a welcome development or just senseless to promote phubbers (mobile zombies)?