This article contains a very simple method to stop someone we do not want following us without having to ask or choose any of the other solutions.

Are you in search of a very simple method to stop someone we do not want following us without having to ask?

It’s hard to believe that Twitter, launched 13 years ago, has been active for more than a decade since July 2006, which makes it, along with Facebook, the most active veteran social network of those that currently leads the market with hundreds of millions of active monthly users. A network that does not resemble any other and that in its particularity resides its unique character as it is its operation based on short messages, which has been both its conditioner and the secret of its success.

In fact, Twitter as such is one of the best places to find out about things that happen around the world in real time – especially with the option of the live broadcast that Periscope provides. Any event, news, accident or conflict comes to Twitter before any other social media network and, of course, before any digital news writing.

How to remove followers on Twitter: Force the Unfollow to a follower

But now the problem is that Twitter is a huge breeding ground for haters, trolls and other bitter existential who enjoy bothering others, harassing and promoting unnecessary hatred, which together with how slow moderation works. The platform causes many users between normal people and celebrities to close their account and go to other sites like Instagram.

Do you have problems with someone who follows you but don’t want to make your account private?

Does it bother you to place a direct block on a follower?

Well, there is a very simple method to stop someone we do not want following us without having to ask or choose any of the other solutions. It is not through third-party apps or hacking. It is simply giving a couple of clicks to one of the most direct and radical functions of the social network: The Block button. 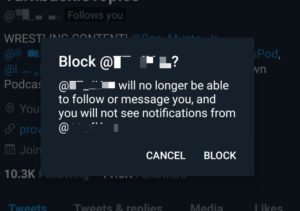 This measure is not for those who want to put a permanent block. In reality, the block is something used momentarily. To remove followers on Twitter, simply block the user/account you want to stop following you and unblock it instantly, that’s that easy.

According to the rules of Twitter, when we block a contact, we stop following him instantly and he stops following us, even if he does not want to. So simply block a follower and remove it later, that user gets to stop following us as discreetly as possible.

What if he insists on following us again? Well, it would be a matter of thinking about silencing it or directly inserting the permanent ‘block’.

Hoverboards are becoming essential for individuals living in towns, used as sports or means of transport. Hoverboards are considered the best transportation mode in...
Read more
Tech Gist