Huawei has just introduced a smartphone with its first pop-up camera, Huawei P Smart Z. See is its full specs, features and price in Nigeria. 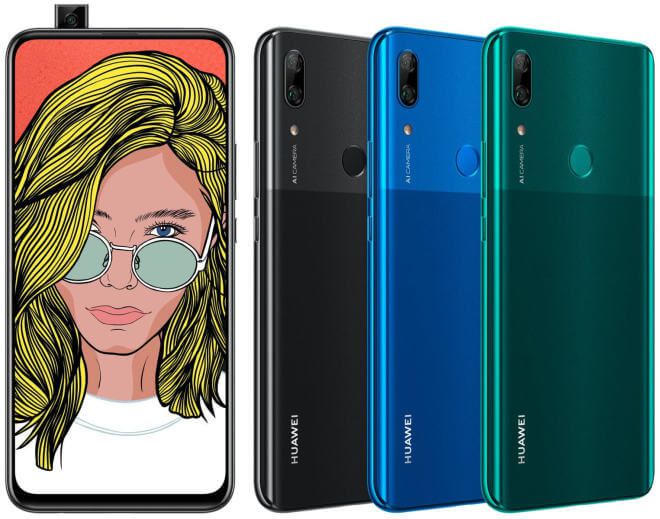 Xiaomi, Samsung, OPPO – the competition has been around for some time, but now the second largest smartphone manufacturer in the world is moving in as well: Huawei launches its first device without “notch” and without a bezel, but with a popup front camera on the market. The P Smart Z should not only satisfy with an almost borderless display but also bring along a number of other attractive features.

In this article, we would delve deeper into all the full features and specs of the P Smart Z full-screen smartphone.

Because it uses a camera pop-up mechanism, P Smart Z also officially became Huawei’s first smartphone that is not decorated with notch or bangs on the screen measuring 6.59 inches. As a result, the Full HD + LCD screen resolution of 2340 x 1080 pixel looks more spacious.

The P Smart Z 2019 achieves a sleek 19.5:9 screen aspect ratio, which accounts for a staggering 91% of the smartphone’s body (AA/TP, Huawei lab data), making it perfect for streaming videos or gaming.

The pop-up camera is also claimed to be strong enough to withstand the pressure of an object weighing 12 kilograms and will still work well after oscillating as much as 1,000 times.

On the back, there is a 16MP dual resolution camera + 2MP depth sensor. There is also a fingerprint scanner panel under the two cameras.

Huawei P Smart Z runs with Android 9 Pie coated with the EMUI 9.0 interface made by Huawei. There is a 4000mAh battery that sits under the shell.

Available in a choice of blue, green and black, the Huawei P Smart Z has begun to be available in several European countries. Although, it is not yet known which countries will be targeted by this smartphone.

The Huawei P Smart Z launched May 2019 (Expected availability in May 2019), it is available in colours — Emerald Green, Midnight Black, Sapphire Blue. When available, you can order the phone from any of the online shopping markets using the links below.

Where to buy P Smart Z

CLICK HERE TO BUY THE HUAWEI P SMART Z in Nigeria (Expected availability in May 2019).

Kindly share your opinions about this smartphone in the comments.

Currently, Huawei is having a big problem. The reason is that after this Chinese company was banned from collaborating with Google, Huawei also cannot...
Read more
Huawei Phones

As we know, currently the latest smartphone made by Huawei is no longer equipped with Google Play Services, therefore users cannot use services from...
Read more
Huawei Phones