LEAGOO KIICAA Power is one of the latest smartphones of LEAGOO, it’s coming with 4000mAH large battery and 8MP+5MP rear dual camera. I have with me the LEAGOO KIICAA POWER device and for those looking to buy, this post contains the perfect LEAGOO KIICAA POWER review & unboxing to help you reach a final buying decision. 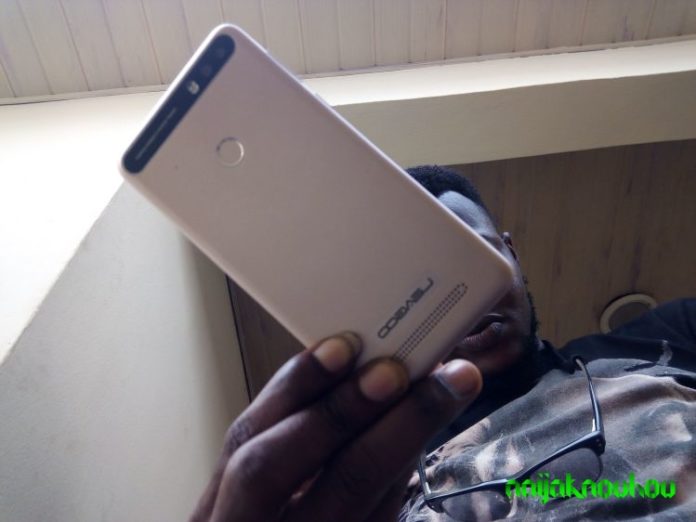 So stick with me as I unbox the cheapest 2GB RAM budget phone to help you reach a final buying decision.

LEAGOO KIICAA Power is one of the latest smartphones of LEAGOO, it’s coming with 4000mAh large battery and 8MP+5MP rear dual camera.

For that who do not know about this brand, LEAGOO made massive sales during the recently concluded Jumia Mobile Week, in fact, they reportedly made over $1 million in just a few days.

NAIJAKNOWHOW has been a media partner for LEAGOO all through this period and as such helped in massively promoting the brand in Nigeria.

You can CLICK to check out their official store on Jumia.

Let’s get started right away.

Contained in the box are the following: 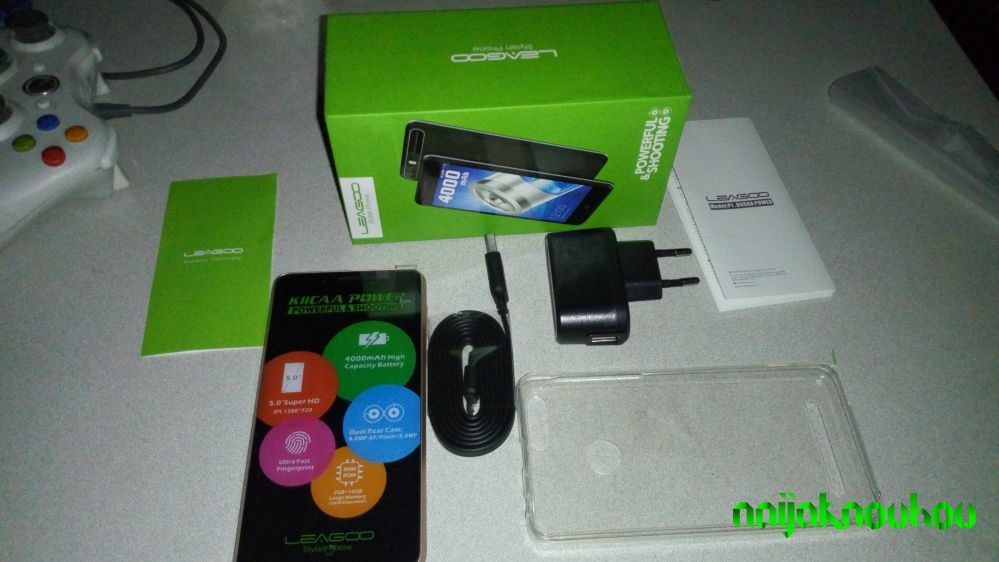 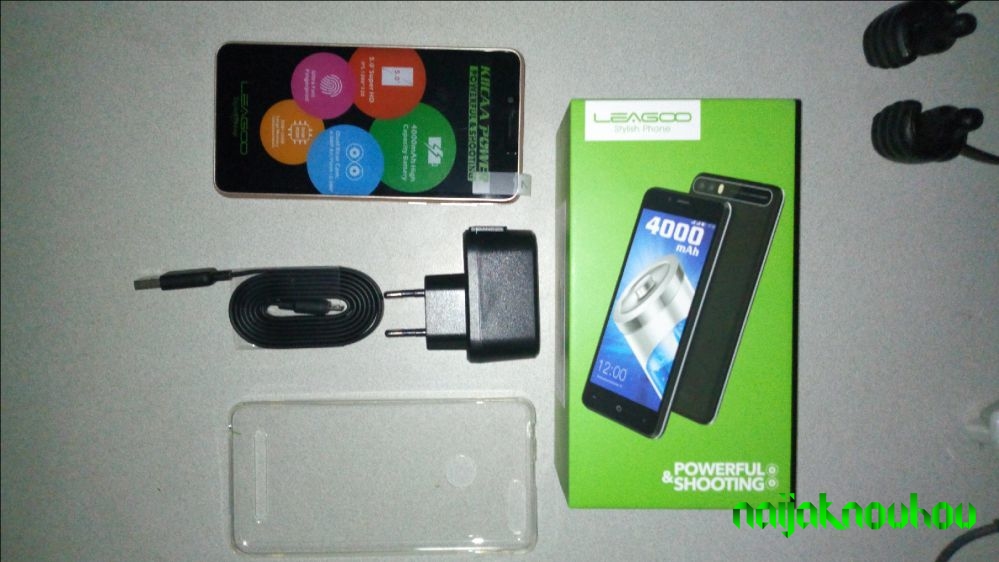 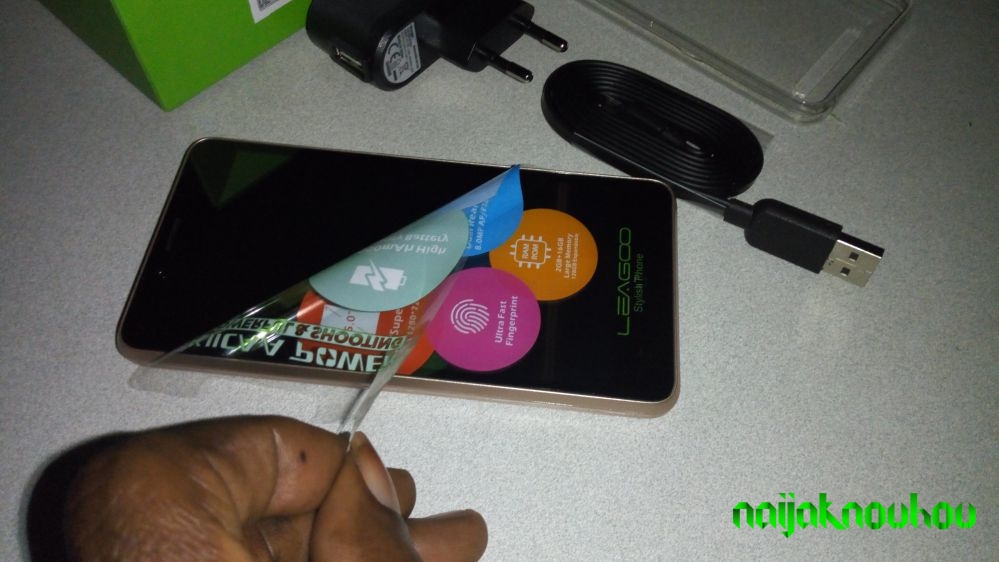 KIICAA Power is equipped with 5.0 inch HD（1280x720P）HD display screen. According to LEAGOO.. they claimed its luminance reaches up to 400ppi which is rare in the entry-level smartphones, and combined with IPS full lamination technology, it brings us more transparent display effects and touch operation experience. 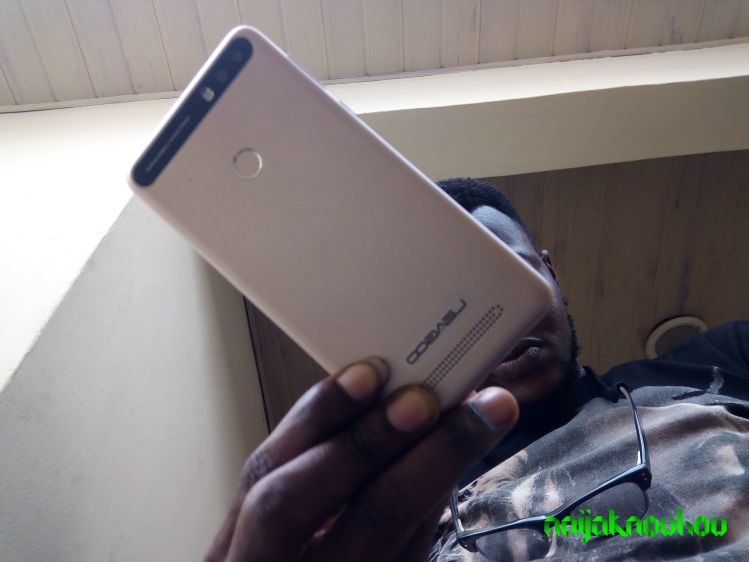 When I first held the LEAGOO 5.0″ device, it felt quite bulky so I had to place it on a scale to know what it actually weighs. 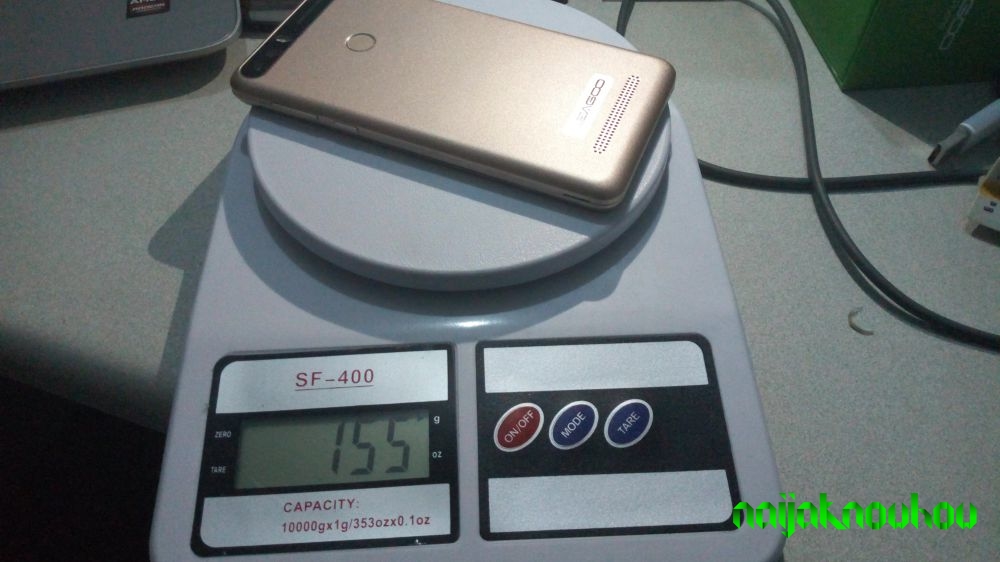 For a phone this bulky and with a big battery, I think the weight is reasonable compared to the 4300mAh Infinix Note 4 which currently weighs 216g.

This device is made completely out of plastic material and that makes it relatively fragile to handle. And when mishandled or falls accidentally, it could actually break instantly! 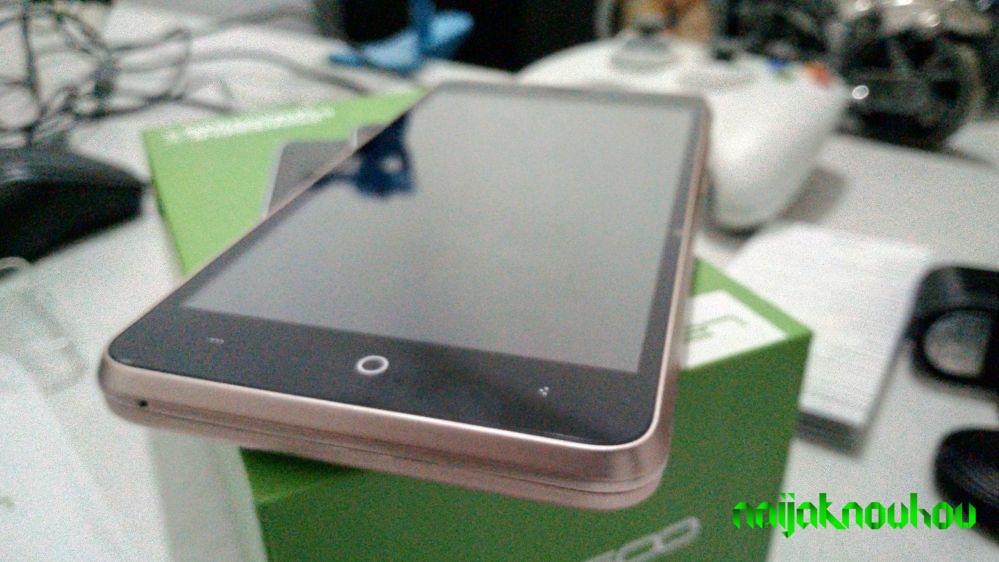 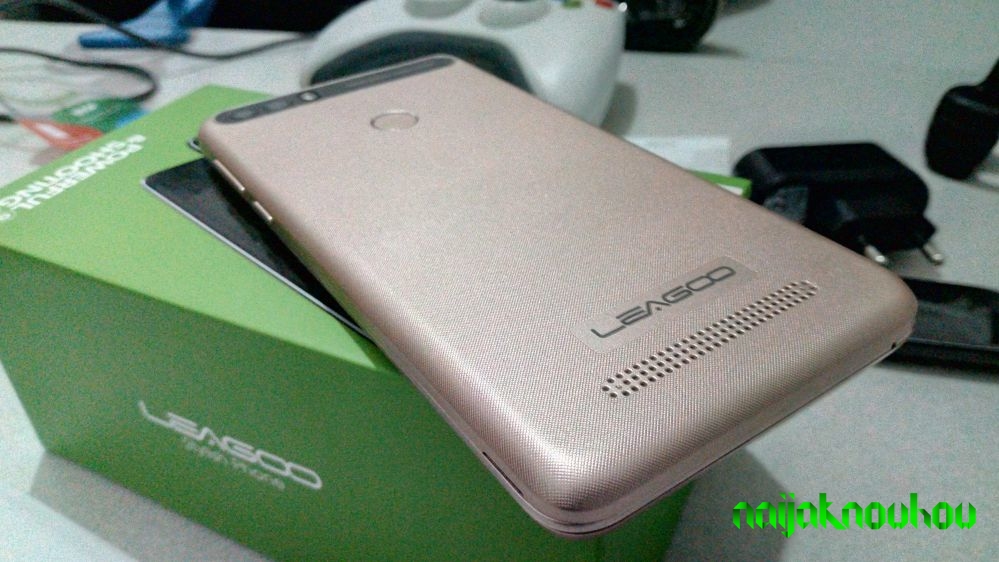 The volume rockers and power button are placed in the usual position (right side). 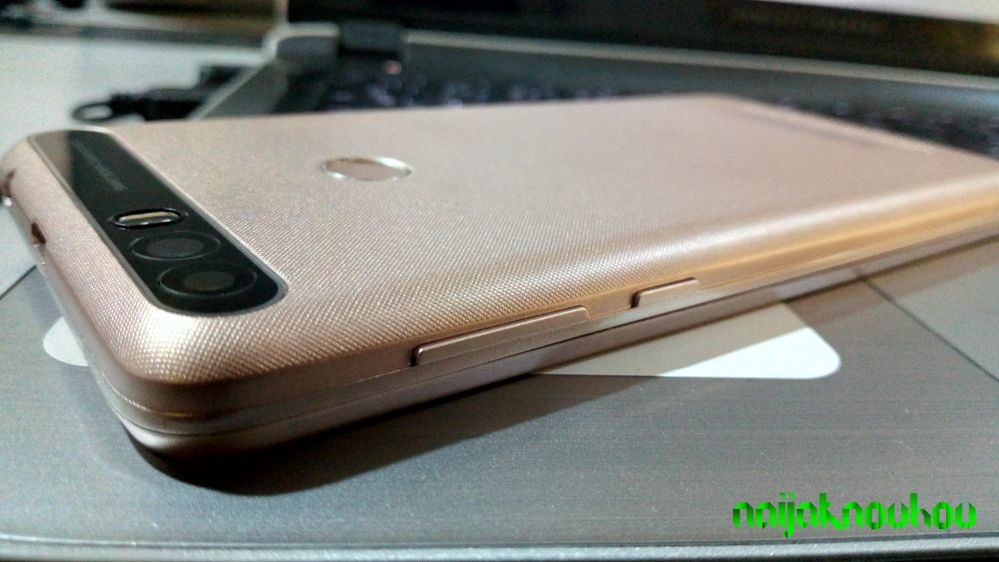 At the top, you will find the earphone jack and micro USB port. 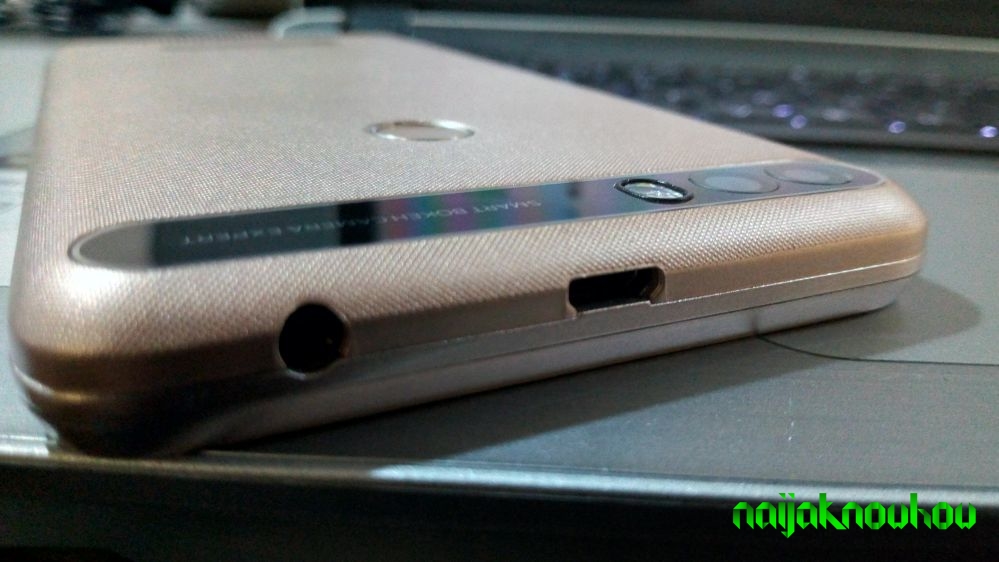 Why isn’t it a type C USB though?

At the bottom, you will see only the microphone port. 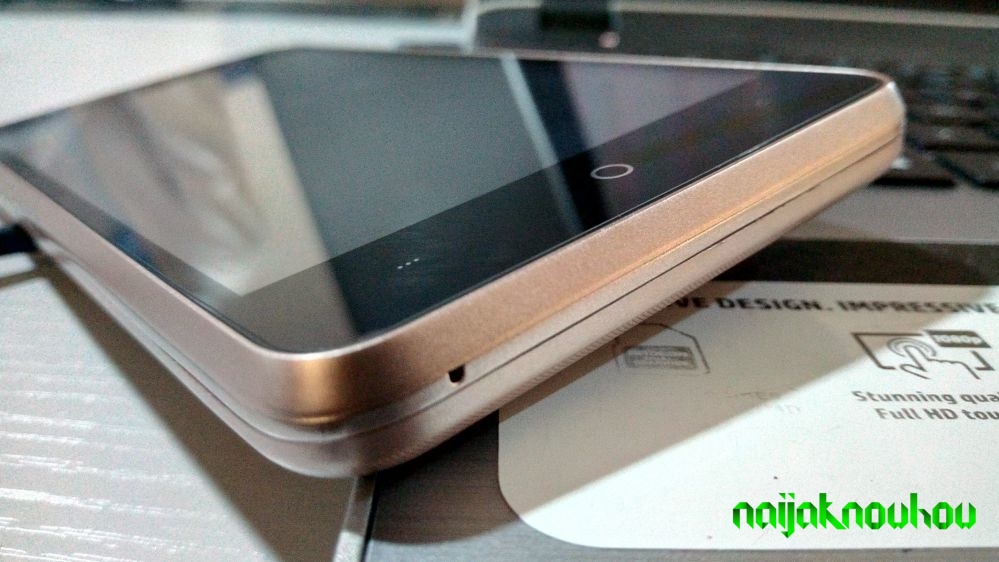 Moving on top the back of the phone, it carries the dual rear camera, flashlight and the fingerprint sensor placed in the centre of everything slightly below the top. 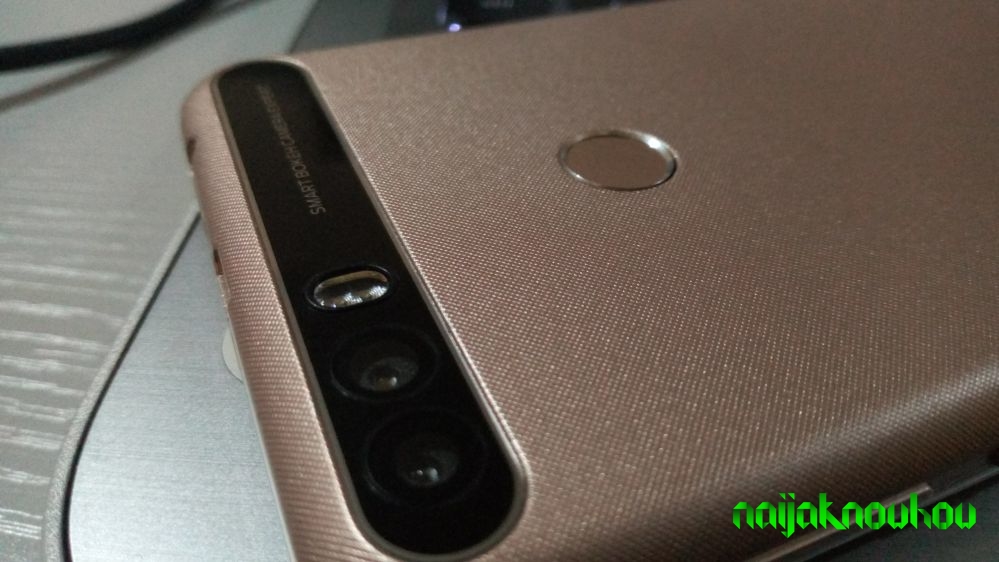 LEAGOO claimed its finger sensor unlocks within 0.3s. if that’s actually true then it not instant enough!

Navigate to turning on device part (next subtopic below) to see what we discovered testing the fingerprint scanner on the KIICAA POWER.

The speaker, on the other hand, is positioned in the lower region of the LEAGOO KICAA POWER back. 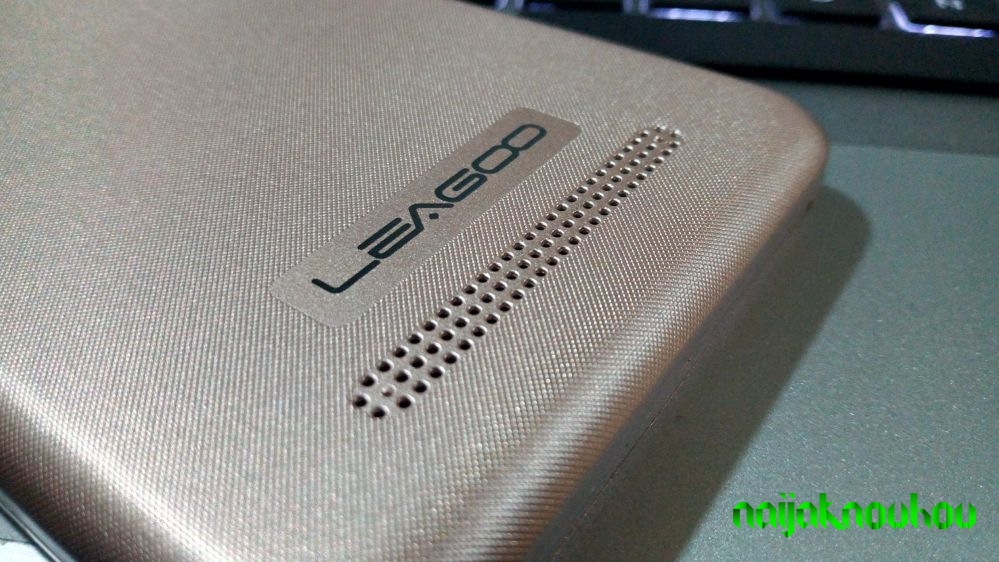 Not so cool when you think about placing the phone down while listening or watching a video. Speakers shouldn’t be there, positioning its speaker under would have been better though!

The front side has the selfie camera, call speaker and sensor. 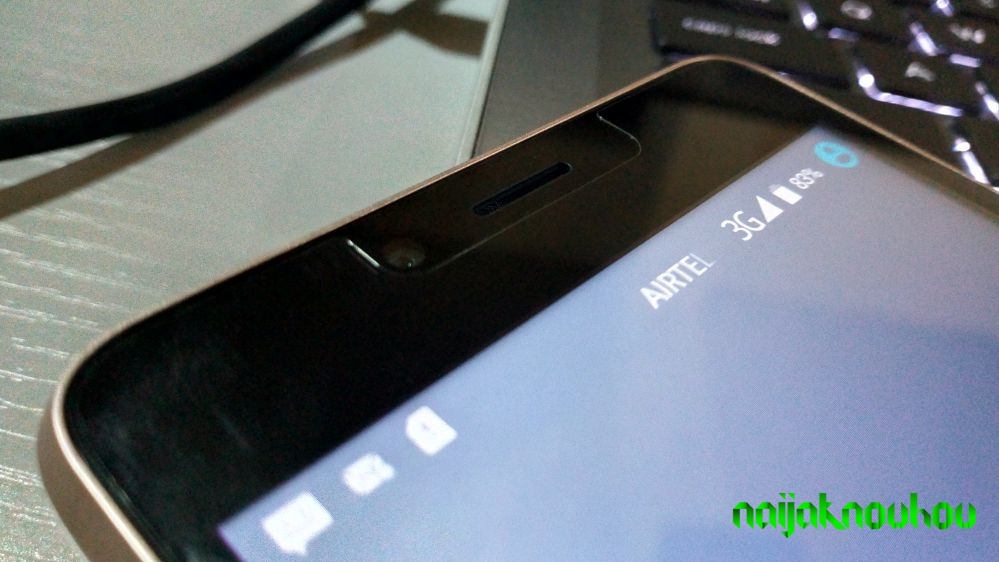 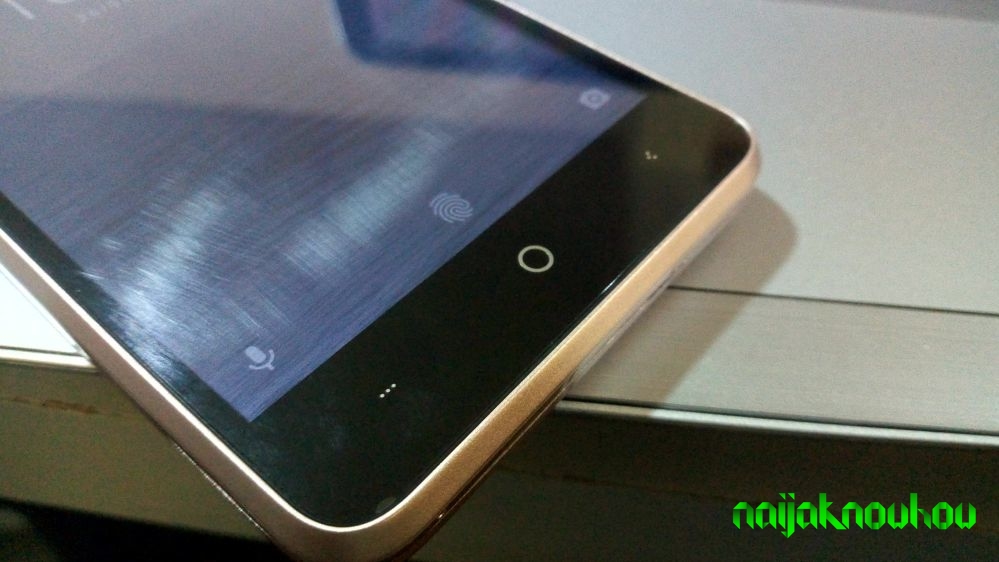 This device comes with a dual Micro SIM slot embedded when you open the back cover device. As well as the MicroSD card that can be expanded as time goes on and a removable 4000mAh Li-polymer battery! 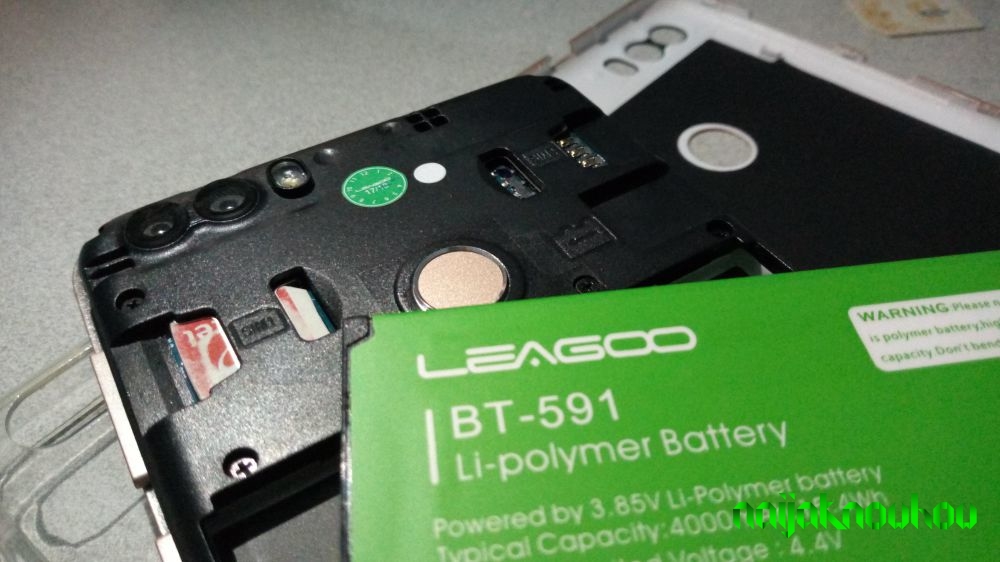 Turning the LEAGOO KIICAA POWER on…

Before turning on this device, make sure you open the battery cover to remove the seal from the battery connector or the other device.

When turned on, the KICAA Power comes with an Android 7.0 LEAGOO OS 3.0 lite UI which I particularly love. Has a CPU Architecture of 4 cores ARM Cortex-A7 1.3 GHz, not the best processor but for a budget phone… Not bad!

As for the GPU, it comes with a 2 core Mali 400MP graphics processing unit.. this device is not for heavy gamers at all. It doesn’t handle any graphics intensive app well. In fact, don’t expect to have the best experience when it comes to watching movies, running multiple apps, playing video games with crazy graphics (an example is PES, Need for speed, Asphalt etc).

I also did a multi-touch test on this device… Sorry, it only supports two touch point. So, don’t expect to have the three finger swipe feature that allows you to take screenshots. 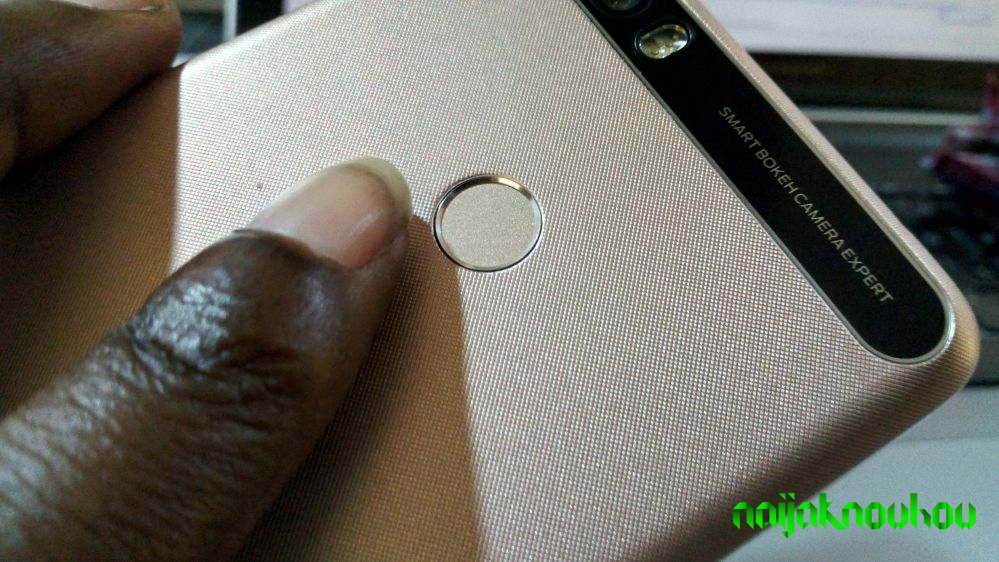 Another possibility might be because this KIICAA POWER sports a small size fingerprint scanner. So I guess it’s perfect for those with tiny thumbs/fingers.

Now… let’s have a quick look at the key specifications below.

Here are the LEAGOO KIICAA POWER key specifications on what you should expect when you buy this smart device.

Is 16GB ROM enough for a budget phone below 20k?

Obviously, what do you exact from a phone so cheap? You cannot install too many apps and files on a 16GB storage only if you want to expand using a memory card up to 32GB.

As for the RAM, when tested its ability to multi-task smoothly without re-opening apps, it FAILED!

I tested with about 4 apps, and it worked fine without reloading them.

Here is what this device measure when tested with the Geekbench score.

Battery capacity is the key features of mobile phone endurance. With well-selected optimized high density quick charging battery core, battery density ratio is up to 630:1, matched with up to 4000mAH high-capacity, KIICAA Power has achieved higher density and smaller volume of the battery, making it possible that the small body has long endurance. 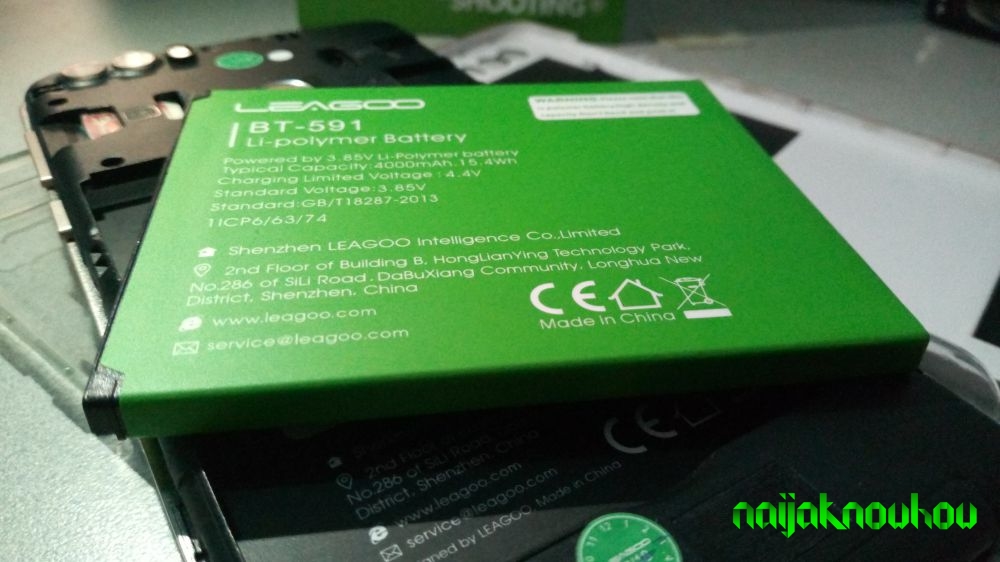 When put on a real battery test…

On a norm, this phone should go as long a day with light usage.

Here is a screenshot showing that 62% of the LEAGOO battery predicted to go 1 day and 12 hours with standby intelligent power saving switched on.

I engaged this device with 7 hours of none stop music, It dropped from 100% to 77% (with Wifi network turned on).

While charging this device, I noticed it doesn’t get very hot which is a cool thing!

How long it took to fully charge the LEAGOO KIICAA POWER

It will take you about two hours to fully charge this phone if you use the recommended charger.

Also Read:  The #OnlyGadgetYouNeed: Step up your creativity with the new Nokia 8.3 5G and Nokia 2.4

See.. forget all these 8MP this, 5MP that or even the dual rear camera abi shey na bokeh effect feature… No be wetin we wan chop.

If you are a photography or selfie lover, just stay away from this device, it’s not for you. It would give you decent photographs but not insane top quality images.

Here is a selfie comparison with the Infinix Note 4

I am not impressed with the colour saturation and sharpness of images taken with this camera.

If you are planning to utilise this camera for night videos using the front-facing camera… Just forget it… this camera can’t be used for any video recordings at night only if that room is well illuminated.

The camera quality isn’t so bad during the bad but I have a problem with the colour saturation.

This video was shot in a moving Tricycle (Keke) during the day.

This video was shot at night in a dark room using the flashlight to illuminate the objects.

As you can see from the video recordings above, you will agree with me that the LEAGOO KIICAA POWER device has a horrible camera.

Although, I discovered that the dual camera helps to record a better video.

If you want something a bit better than what you have above, then consider switching from a single lens camera to the dual camera.

To use it use the dual camera button to switch from single to dual (see screenshot below):

So over to you… let me know what you think about the KIICAA POWER camera?

My thoughts about the LEAGOO KIICAA POWER

This device is available on Jumia (official LEAGOO store) and it retails at N19,900 which I think is pretty decent for a phone of this pedigree!

Where to buy the LEAGOO KIICAA POWER

Also Read:  How to Create a System Image to External Hard Drive in Windows 7/8/10?

The LEAGOO KIICAA POWER is one of the cheapest budget smartphones out there and coupled with it’s 4000mAh battery, a dual rear camera with smart bokeh effect it make it the perfect smartphone to buy as a second device.

Although it has some setbacks as earlier spotted… I think one of the top reasons why you should go for this is, if you are searching for a cheap Android phone with 2GB RAM not more than N20,000… then have no doubt choosing this device.

Let me know what you think about this device using the comment box right below.

- Advertisement -
Share
Facebook
Twitter
WhatsApp
Telegram
Previous articleLEAGOO X – the Next “X Fever” on the Way
Next article21 Careless Things You Must Stop Doing While Using Phones & PCs (No 7 Could Lead to Death!)

Today, more and more children are using mobile devices. What's shocking is that adults are not monitoring what children are doing online. However, new...
Read more
Nokia Phones

In a world where every individual doubles as an on-the-go content creator and content consumer, you need a smartphone that aids your creativity and...
Read more
Applications