LG V40 ThinQ Leak - The latest leaked image is claimed to be the next high-end class smartphone from LG, the LG V40 ThinQ, circulating in online. Learn more! 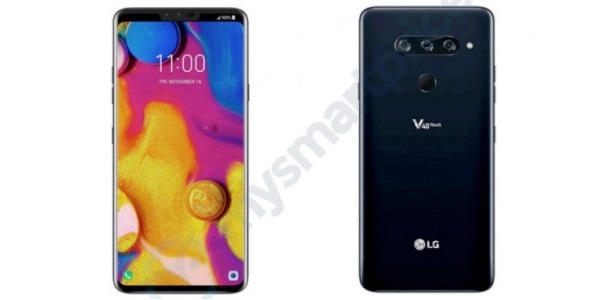 The latest leaked image is claimed to be the next high-end class smartphone from LG, the LG V40 ThinQ, circulating in online.

It is seen that this smartphone comes with a ‘notch’ or bangs at the top of the screen which is considered not surprising because the notch design is one of the latest trends in the smartphone industry.

Interestingly, this leaked image also shows that the LG V40 ThinQ has the support of three rear cameras. Not only that, it also appears that LG is equipping this new smartphone with a dual camera on the front.

The three rear cameras on the LG V40 ThinQ adopt the traditional form factor by presenting cameras that line horizontally. All three cameras are accompanied by a small LED flash on the right side and a circular fingerprint scanner under it.

Based on previous leaks, LG will still continue to present a 3.5mm audio jack on the LG V40 ThinQ, with a USB Type-C port for battery charging and connectivity.

The other specifications of this smartphone are still a mystery. However, some parties predict that the LG V40 ThinQ will be supported by the powerful Snapdragon 845 chipset, the P-OLED screen, and will run using the latest Android 9 Pie operating system.

The latest leaked image also displays November 16 on the smartphone screen, which is estimated to be the launch date of the LG V40 ThinQ.